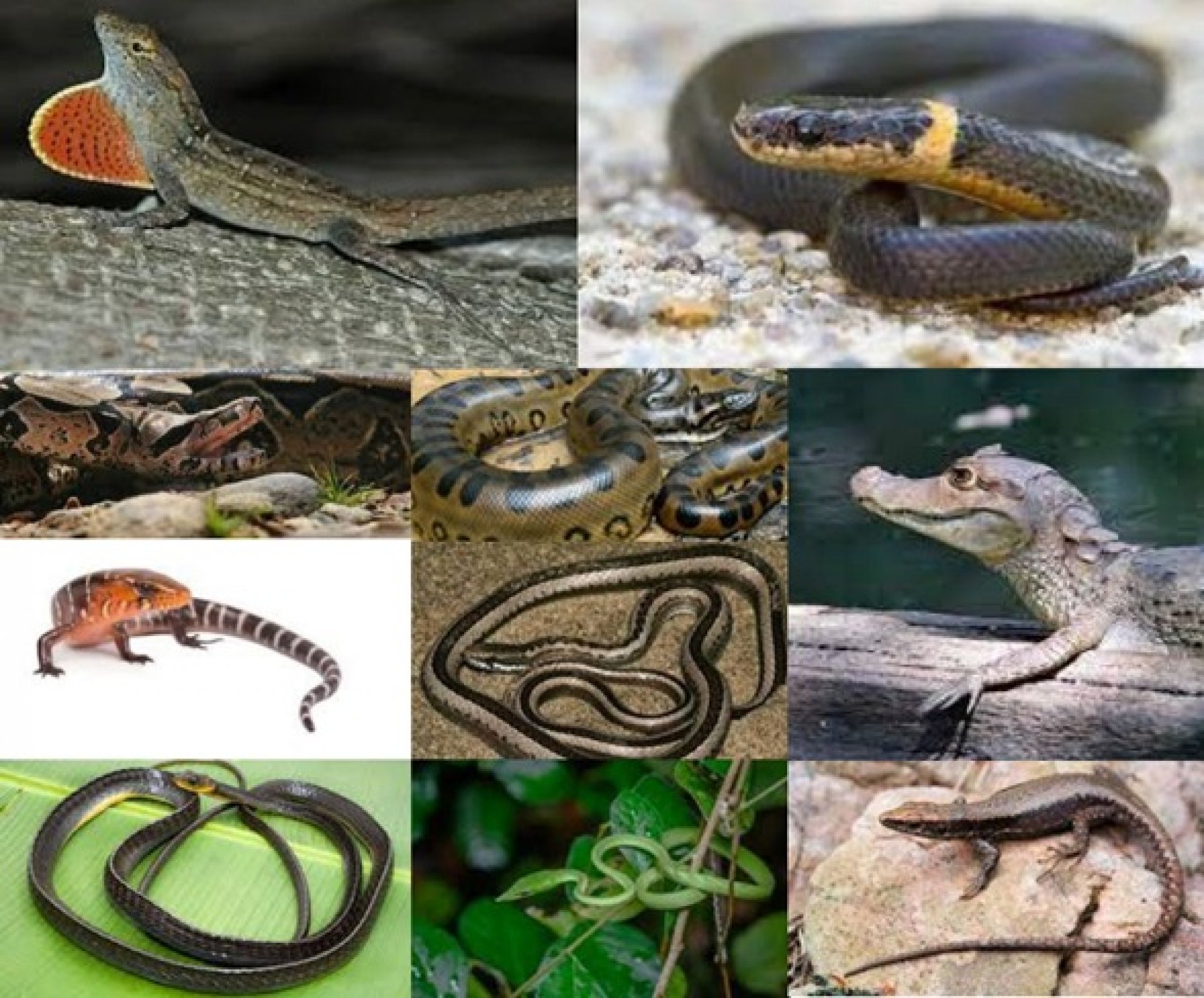 If you like this type of cold-blooded species, you will be able to observe much of their natural habitat on walks through the jungle or as you pass by boat through the passing rivers. Having the ability to maintain contact with them is an activity that you might love.

Known more as white alligators, they are nocturnal, which is why they tend to be evasive in the face of danger, however, they go out to sunbathe during the day on the river islands. They reach a maximum length of 1.5 m. They are carnivorous, but their diet is adapted to the habitat, and they also feed on small mammals, fish, molluscs, and some crustaceans.

Their colors are quite striking, which is why their name is derived from these characteristics, they are rarely seen because they also live in areas of leaf litter, under logs and stones in forests.

Seen as one of the largest snakes in the world, it can be diurnal or nocturnal, so it can be seen among the trees or on the banks of rivers, adding that it moves alone. Depending on the size that they carry, the prey will vary in size in the same way, its solitary in activity and it is very agile to maintain the ambush technique.

Known more as whip snakes, it is diurnal and is usually found on land. Its frank vertebral is dark and its lower region is pale yellow and it usually rests on bushes. It feeds mainly on frogs and if disturbed can sometimes be aggressive.

It is characterized by having very long tails and as a defense mechanism its body swells and increases in size to automate its escape in case it is captured by a predator in its escape. Running snakes are a diurnal species that generally lives in semi-arboreal areas.

This species maintains its brown and beige body. They have been observed up to 2m in length and can practically attack in self-defense if they feel threatened. In the same way, their mating is in the dry season and both the females and males can mate with more than the same couple.

This species maintains its bright green body, is diurnal, and is active in low vegetation. Its diet is based on small lizards and some amphibians, this being oviparous and its females lay from 8 to 10 eggs at most.

Its color, its dorsal appearance and its nape are a very bright grayish brown, it is diurnal and feeds mainly on arthropods, adding that they are harmless. Its scales are hexagonal dorsal in transverse series.

Its colors attract a lot of attention since its upper part is dark brown and its lower part is light orange and its sides are dotted with white. Its dimensions are 36 mm in males and 40 mm in females.

Species of arboreal lizard which is distinguished by having scales and an enlarged and flattened crest of striking orange color. They are generally territorial and their males are large compared to their females.

If you are looking for a tour in which you can learn about these species of reptiles native to Cuyabeno, then you have found the perfect place to book a tour in the Amazon jungle with the best possible experience in finding reptiles. Our guides are certified and without a doubt you have to be very attentive with your camera to capture the moment.

If you need more information about tours, prices or itineraries about the Cuyabeno Wildlife Reserve write to us on Whatsapp or to our info@greenforestecolodge.com